What's the Difference Between Medical and Non-Medical Gloves? 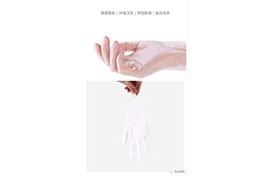 Disposable Gloves Production Lines Manufacturer will teach you the difference between medical and non-medical Gloves.

Distinguish medical/non-medical gloves by use

Used in direct or indirect contact with the blood, body fluids, secretions, excreta and articles obviously contaminated by body fluids of the patient.

Daily work (non-medical work) and daily life to carry out operations that require the protection of the hand, such as industrial manufacturing, cleaning labor insurance, experimental chemistry, or certain operations have hygiene requirements, such as food processing, etc.

Use appearance and packaging information to differentiate medical/non-medical gloves

1. Distinguish by the appearance

Medical gloves are divided into natural rubber gloves, nitrile rubber gloves, polyethylene (PE) gloves, and polyvinyl chloride (PVC) gloves. There are many kinds of non-medical gloves. Besides the above four kinds, there are cloth gloves, leather gloves and so on.

If the gloves are not made of either of these materials, they can be considered non-medical gloves

Observe whether the words such as "surgical" and "medical" are included in the packaging information of goods, and whether the medical application scenarios and medical USES are described.

Gloves may be classified as medical/non-medical according to the applicable standards indicated in the package or the test report or certificate provided by the manufacturer.

Medical gloves may generally be deemed to be medical gloves if the packaging of the gloves or the manufacturer provides the relevant FDA information on the test report and certificate, or if the applicable standard is marked.

If powder gloves are not marked with FDA information, they are likely to be considered non-medical.

European Union medical/non-medical gloves are required to be affixed with the CE mark, but the applicable standards are different.

Medical gloves belong to medical devices in THE European Union, and shall be marked with CE according to eu medical Devices Directive 93/42/EEC(MDD) or EU Medical Devices Regulation 2017/745/(MDR).

The corresponding standard is EN 455-1/EN 455-2/ EN 455-3/ EN 455-4. If the above contents are found on the outer packing or test report or certificate of gloves exported to the European Union, they can be considered as medical gloves in general.

Since medical gloves are registered or controlled according to medical devices in most countries or regions, consumers can further distinguish through relevant registration and control information.

Medical gloves belong to class II medical devices in China, which are registered and managed by the provincial drug regulatory department, and can be checked through the medical device access number.

We are Nitrile Gloves Production Line Suppliers. If you have any requirement for glove machinery products, please feel free to contact us.

Previous: What Is the Difference Between Nitrile, Latex and Vinyl Gloves?
Next: Nitrile Gloves-the Future Market Leader?