Status of the Global Disposable Glove Industry in 2020 (Up)

The steady growth of the national economy provides the foundation:

In 2019, China's national economy is generally stable and its development quality has been steadily improved. According to preliminary calculations, the GDP of the whole year was 99.06 trillion yuan, calculated at comparable prices, an increase of 6.1% over the previous year and in line with the expected target of 6% -6.5%. It is the stable economic growth that provides a good economic environment for the development of China's protective gloves industry. Increasing residents' income promotes industry sales fees

According to data from the National Bureau of Statistics, the per capita disposable income of residents in China in 2019 was 30,733 yuan, a nominal increase of 8.9% over the previous year, and the growth rate was 0.2 percentage points faster than the previous year. In recent years, the income of Chinese residents has continued to increase, which has greatly promoted the sales of protective equipment. 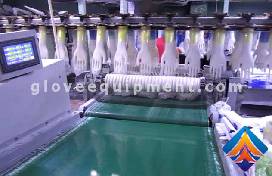 There is potential demand for a large population:

The industrial scale of disposable gloves production lines is closely related to the number of people. Data show that the total population of mainland China (including 31 provinces, autonomous regions, municipalities, and the People's Liberation Army active duty soldiers, excluding Hong Kong, Macau Special Administrative Region and Taiwan Province and overseas Chinese) at the end of 2019 was 1.4005 million, an increase of 467 over the end of the previous year Ten thousand people. China's population has exceeded 1.4 billion. The huge population has brought huge demand for the protective glove industry. In the future, the new market capacity of disposable health protective gloves will be considerable.Growing number of health technicians:

The use of protective gloves by medical staff is a huge number. Disposable health protection gloves can effectively prevent AIDS, hepatitis B, influenza A H1N1 influenza and new crown pneumonia virus, and effectively protect the health of doctors and patients. According to the National Bureau of Statistics, as of the end of 2019, there were 10.1 million health technicians nationwide, a year-on-year increase of 5.98%. Of the 10.1 million people, 3.82 million were practicing physicians and licensed assistant physicians, and 4.43 million were registered nurses. As the number of health technicians continues to grow, so will the demand for disposable health protective gloves.

Disposable health protection gloves are widely used in many industries including medical, pharmaceutical, food, automotive, and other industries. At the same time, due to factors such as health and hygiene, product quality control, and employee safety, the demand for disposable health protective gloves is expected to continue to grow. It is predicted that the size of global disposable protective gloves will increase from US $ 7.63 billion in 2014 to US $ 17.242 billion in 2022, with a CAGR of 12.6%.

Previous: Status of the Global Disposable Gloves Industry in 2020 (Down)
Next: How to Wear and Take off Disposable Medical Gloves